Numerology 'IF' it can predict 2018?
As the New Year approaches what can we expect, what can the numbers tell us?
Can we trust numerology and is there proof that its predictions will come true in 2018?

So let’s look and see If Numerology is true?
Numerology comes in many forms across many cultures, in these systems of varying beliefs practitioners’ attribute numbers with special power, this power often used to predict future events.
Astrology, tarot, and even the Hebrew Kabbalah are closely linked with numerology.
The numbers 1 to 11, and 22 are considered highly important by numerologists.
They believe these numbers can show positive and negative personality traits.
For example, the number 1 is said to represent someone whom is domineering, whereas the number 5 is said to imply a free-soul, a person who is easily restless.

The standard numerology graph is an alpha-numeric table (presented underneath) 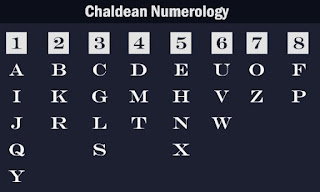 This graph gives a number for each letter.
Using this graph words like a name can be changed in to a number values, these number then used to make predictions.
So what predictions are there for 2018?
Here are Some Numerological predictions month by month
In a year that already has a barrage of information (both false and factual) as its most significant influence, January and October peak in this regard. Long hidden facts come to the surface, secrets are revealed, and high-ranking people are exposed during these months.

February, May, June, and November are particularly vulnerable to natural disasters, as well as upheaval in the financial markets.

April has its focus on everything regarding labor -- expect strikes or other labor-related unrest.

March and December are centered around the abuse of freedom, nationally and internationally, as well as breakthroughs in bringing freedom to places where there was little previously. There will be rapid changes and much unrest.
www.numerology.com
September and November bring emotions and passion to the surface, causing considerable upheaval globally.
So how were these predictions made?
What numbers make 2018 a year of upheaval, unrest and change?
It is claimed that 2018 is a 2 Universal Year, reducing from the number 11 (because 2+0+1+8=11, and then 1+1=2). With the sensitive, finely-tuned, emotionally-conscious 11 behind this peace-loving 2, you can count on an emotionally-charged year that touches our hearts more than previous years.
Passion dominates in 2018, which is good when driven by positive forces, but not so great when negative powers are at play. Most importantly, no one gets to sit on the sideline without being affected by these changing times. With a 4 at the top of the Numerology chart for 2018, and a 5 at the bottom of the chart, chaos rules!!
So things are not sounding too good.
Should we worry?
Well let’s see if numerology is accurate.
It seems that this form of prediction is given more credence then say a crystal ball, this maybe be because of its age dating back to ancient Greece and its ties to The Greek philosopher Pythagoras.
It is how ever, no different from any other form of practice used to try and divine the future.
Numerologists can produce a "reading" for you, just as astrologers, biorhythmists and psychics can!
These readings are often seen as accurate and amaze people, but there is something else at play here
Selective thinking
When people receive a reading, they may find themselves ignoring the parts that don't fit their life, and focusing on those parts that seem to fit.
They may actually fit or they may fit a preconceived image of how the person would like to be.
If the reading has information that fits, people may fall for it.
Believing the future has been seen!
There is no evidence that these readings get anything right when predicting the future, instead they often tell us what we want to hear.
If this system worked how can numerologist account for the differences in language and different alphabets?
Calendars also pose a problem which date format do these predictions follow?
To think the universe is organized by numerical interpretations of names is a crazy theory, what happens when someone changes their name is the universe changed , are a new set of outcomes created each time this happens?
It is true that much of the universe can be broken down to mathematical formulae.
These formulas can then be studied repeated or not, this scientific method confirming the existence of something in a controlled and demonstrable way.
The universe is and all its content are governed by mathematics but not controlled by it.
Galileo saw nature as a written mathematical language but to leap to idea that if a name is given a numerical value it can then change or influence nature because numbers and math are being used is wrong.
Numerology is a system of guess work, a method of counseling, like all other forms of predication.
They are a way for people to talk through their hopes for the future and regrets from the past. A reading given to help the person concentrate on their future.
These practices often need an object for the people to focus on, a tangible link to the future.
This comes in many shapes a crystal ball, a bowl of water, animal bones and numbers!
They are all the same.
Props in a show.
We can all speculate on the future and these ideas are formulated on our pasts,
We don’t need these kooky methods.