'IF' The Vatican files? 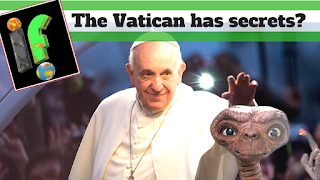 Let’s find out if the conspiracies are true?
What do we actually know about this most mysterious place?
The Vatican's secret collection of Documents, known as Archivum Secretum Apostolicum Vaticanum, these Files contain chronicled records covering 12 centuries, they include many unique objects and letters.
Writings of Michelangelo, archives identifying magical and mysterious objects, correspondence, and even a supplication composed on birch bark by the Canadian Ojibwe tribe in 1887.

People have always speculated on what could actually be found in the 50+ miles of racking in the Vatican's secret hall of records.
A very select group of researchers, scholars, and writers have been permitted to enter these hallowed halls and view Documents, the documents they viewed having to be requested before their visit.
This leads us to a chicken and egg situation if we don’t what is in the vault how can we request it, this is why many believe that you must be part of a society that has and shares this secret knowledge.
So what do people think is hidden in this vast library of secrets?

Firstly the truth behind life of JESUS CHRIST.
Many claim the record halls contain correspondence between Holy persons. Correspondence between the apostle Paul and emperor Nero all relating to Jesus' and his presence and with information on his family tree and lineage.
Some scholars claim the Vatican might be concealing that Jesus did not exist. We took a look at this in another video “if Jesus was real”

Secondly Alien contact and hard evidence for the proof of EXTRATERRESTRIAL life.
Hidden confirmation of alien life and its presence on Earth is said to be securely kept under lock and key in the vault, items such as extraterrestrial skulls
Chronicles containing confirmation from the Pope that they are real and have a plan to tag track everyone on this planet using the guise of religion to enact this plan.

Knowledge on the date the world will end.
We have also covered this in another video linked above–the archives are said to hold THE THREE predictions OF FATIMA. These prophecies have been hidden since 1917, after the three Portuguese youngsters were given visions of the future after being visited by the Virgin Mary, Their predictions were given validity after Mary appeared to the whole village at a time and place foretold by the children.
They made three such predictions on what was to come, and of these three, two prophecies are said to have occurred with the third being kept locked away and held secret.
Many theories have been suggested for the Third Prophecy; the collapse of the Catholic Church, an atomic holocaust, to a catastrophic series events leading to the End of the world.

Other types of secret information maybe held like Pornography and evidence of sexual misconduct.
The library is said to be the home of to the biggest accumulation of erotic entertainment in the world. This information is affirmed by Copenhagen's Historical center Erotica, where their guests are routinely told  that the Vatican holds the biggest gathering of erotica on the planet, researchers Camille Paglia and author William F. Buckley, Jr.  Have also supported this claim.
They may also hold evidence and the records of sexual misconduct by priest it is commonly known the church systematically hid evidence of its misconduct to protect their priest. If these records were to see day light it could end the Catholic Church.

And no conspiracy would be complete unless we have the ILLUMINATI.
Again something covered in another video see the link above.
People claim that these records are controlled by the Illuminati. It’s said that after the group’s disbandment, the Illuminati actually hid itself, choosing the most noteworthy organizations on the planet as their hiding place. One of these places, Vatican City, over the many year’s high figures, including the Pope, are thought likely to be members of the Illuminati.
And finally the churches links to Nazis during WW2.
David Kertzer, a student of history, inspected reports from the rule of Pope Pius XI (1922 - 1939). He reasoned that the pope had made deals with Mussolini to secure the Church and its place in society in exchange for its silence on anti-Semitism. Others say that the Pope worked against the Nazis and helped to hide Jews saving them from Nazi hostility.

So what is the truth?
Could of all these ideas be true?
Where is this information coming from?
What do we actually know?

The truth behind these mysterious files maybe far less exciting, starting with the name which is from a mistranslation of the Latin.
The genuine name of the Vatican documents is Archivum Secretum Apostolicum Vaticanum .
'Secretum' in Latin does not signify 'mystery' as some many think. It more accurately translates to 'individual' or 'private'.
The chronicles hidden are in reality collections of private letters and records kept by past popes over the hundreds of years of the church.
The record halls were created Pope Paul V. The Pope had a notable collection of documents and items of significance and realized that such records ought to be saved.
The 17th century was a time when the mindset was  that of the average man need not know of the correspondents exchanged by their rulers and popes. So they were kept a safely secured secret locked away in the archives.
These secret letters and notes could be seen by those in power but it was not until 1881 that Pope Leo XIII enabled specialists to see certain documents.
A methodology for those that could visit the archives was developed and this method has not changed for 200 years.
Writers, undergraduates, and non-historical specialists are not given access.
A person who is an expert or an individual whom has demonstrated that he or she is a sufficiently qualified and a genuine researcher, maybe allowed to enter to view the files, this researcher enters through the Porta Sant'Anna , and are supervised by the  Swiss Guard.
However before the researchers get this access they must request the particular reports they wish to audit and they are Only permitted to view  three documents a day.
If a researcher is blessed enough to gain access to the Vatican Documents, he or she would be welcomed into a place where they could  view  a 197-foot-long (60 meters) scroll containing the minutes of the trials of the Knights Templars.
A letter from Michelangelo to Pope Julius II
The 1521 ecclesiastical bull of Pope Leo X suspending Martin Luther
Notes from the 1633 trial against Galileo
A letter to Pope Innocent X from Grand Empress Dowager Helena Wang of China

And Letters from both Abraham Lincoln and Jefferson Davis requesting Pope Pius IX support for the Union and confederacy.
In 2012, in celebration of the 400th anniversary of the archives, the church made 100 documents available to the public, these document held for public display at an exhibit called Lux in Arcana.
Many still campaign to this day for the church to allow access to the library saying the knowledge is the property of all mankind but the Catholic Church still refuses.
Does this mean they are hiding something?
at November 11, 2017