Devolution. IF we have stopped evolving?


Devolution. IF we have stopped evolving?

In one of our other videos we asked the question what animal would likely evolve to replace us.
Which had the intelligence to develop into a complex civilization.
Today we turn that around and ask if we humanity are devolving?
Many claim this is the case with the world population getting ever more stupid, even the size of our brains is said to be shrinking!!!
So what is devolution?
Devolution, can be thought of in the same way as the Darwinian process we are all so familiar with but in reverse.
Backward evolution is the idea that species can revert to more primitive forms over time. 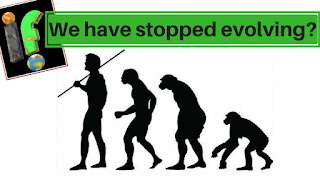 Devolution is related to the idea that evolution works with a purpose
This is known as (teleology) and the process is progressive (which is called orthogenesis),
Evolutionary biology does not make choices on what it feels is best instead natural selection shapes the adaptations.
Small changes like the frequency a single gene is reversed, can happen by chance or through selection, but this is the same as the normal course of evolution.
There has been an hypothesis published that claims humans are becoming less intelligent.
This could come as a major blow to our species.
If we consider that of all the higher primates in the world, we are the smartest but we are also the weakest.
We cannot come close to matching the speed strength and agility of apes, if we lose our smarts we lose our place at the head of the table.
The paper's author, Dr. Gerald Crabtree, suggested that we are seeing a decrease in intellectual and emotional capabilities.
This is because the genes that give Homo sapiens our superior brain power are susceptible to mutation this causing a dumbing down.
The phrase "survival of the fittest” describes natural selection.
This phrase is said to no longer apply to us!
It is claimed that because we have reached the supposed top we are no longer challenged. We do not have to fight for food and battle Mother Nature at every turn to survive.
With this our physical abilities have become weaker.
Many say we can thank the advent of computing and other modern technologies the same rule applies to our brain.
There are those that argue because we co-operate to cheat death we have managed to halt our evolution.
However this idea assumes that "fitness" is only referring to physical strength.
Darwin used the phrase, "fittest" what he intended to mean "best adapted for life in their local environment".
Weaker examples of all species still reproduce.
This is actually a contributing factor in genetic diversity which is a benefit to species.
The idea that all species live in a hierarchical group controlled by alpha males, the alphas doing all the mating and the other males die off without reproducing is wrong.
Alpha males may typically mate far more frequently, but other males still manage to sneak in and pass on their genes.
The weaker males display cunning, they pass this on in their genes.
They may have inferior strength but it would seem they have a greater intellectual fitness.
Brain overcoming brawn.

So this shows us that intellectual fitness is very important and to lose it would be a huge blow for us.
As an example let's take a look at tool use.
Humanity has mastered tool use, but it is not uniquely human ability.
Animals such as Sea otters use rocks to pry open abalone shells.
Chimps use sticks to fish for termites, and even have sharpened sticks to spear other prey animal, they use stone hammers and anvils to crack nuts.
Elephants are known to use sticks to swat flies and chewed up tree bark to plug holes dug for ground water this stopping the water from evaporating
These Animals capable of tool use have clearly benefited from intellectual fitness during their evolutionary history.
Yet believers in human devolution don't seem to think that these creatures are also devolving if they were a lot of them would starve to death.
Animals often evolve such traits to better equip themselves for survival in a given environment, they also evolve the intelligence to manipulate their environment.
Fundamentally, this is hardly any different from humanity.
So With humans devolving and apes making spears is the scenario of our regression to a primal state inevitable?
Our ability to manipulate tools and build an environment suited to our needs has progressed far beyond the basic tool use we see in the animal kingdom, we are still on a quest for survival.
The fact that we cannot survive outside the artificial environment we have made does not mean our evolution has halted.
The environment in which we humans live is what matters, this is not a fantastical universe where intelligence is eschewed and human survival is only decided by our physical fitness.
The world today is a highly developed place, we have created an environment in which nutrition is optimal, and we have vaccinations against diseases, antibiotics and rapidly advancing medical technology.
With these favorable conditions, physical fitness becomes less important and what might have been considered "weaker" genes in the past make their way back into the gene pool.
The belief that the increase in reported cases of illnesses such as asthma and allergies signifies a devolution of the species is misguided.
A rise in the numbers of those with weaknesses such as allergies or asthma is simply expected when medical advancements make them more survivable, the genes responsible for these conditions no longer significantly threaten fitness.

The ways in which we co-operate and manipulate our environment, i.e. our intellectual fitness benefit us far more than physical fitness today.
We should consider that humans will continue to become smarter as a species while simultaneously making our environment increasingly survivable.
Maybe signs such as our shrinking brains are actually showing that our bodies are becoming more efficient.
Dr. Crabtree points out that human intelligence and behavior require the optimal functioning of a large number of genes.
These genes need enormous evolutionary pressures to be maintained. "The development of our intellectual abilities and the optimization of thousands of intelligence genes probably occurred in relatively non-verbal, dispersed groups of peoples before our ancestors emerged from Africa," Dr. Crabtree said in a media statement.
This ancient environment made intelligence critical for survival, so the genes required for intellectual development were maintained and favored, this resulting in the growth of human intelligence.

The problem that is claimed by many is that the development of agriculture followed by urbanization, has led to less natural selection and the most intelligent of us are not sharing genes as quickly as the less intelligent.
Negative Mutations are not weeded out and that has led to more people with intellectual disabilities.
Dr. Crabtree also points out, that recent neuroscience findings suggest genes involved in brain function are especially susceptible to mutation.

Dr. Crabtree made a prediction based on his calculations of the frequency of which these harmful mutations appear in the human genome and says that 2,000 to 5,000 genes are needed for the development of intellectual ability.
He believes that in roughly 120 generations, humans will have sustained two or more harmful mutations to our intellectual and/or emotional stability.
He argues that the combination of less selective pressures along with the large number of somewhat easily mutated genes has and is eroding our intellectual and emotional capabilities.

This brings us back to the question we began with are humans actually "devolving" instead of evolving?
Research showing the potential damage to the human body -- including the brain -- from pesticides, BPA and other chemicals, which we are now bombarded with, might feel that these environmental factors are literally dumbing down huge numbers of people.

However Dr. Crabtree doesn't seem to be worried that humans will grow dumber.
His belief is that future technologies will be able to "fix" the problem, science and medicine coming to our aid.
He said “I think we will know each of the millions of human mutations that can compromise our intellectual function and how each of these mutations interacts with each other and other processes as well as environmental influences," Dr. Crabtree said in the media statement. "At that time, we may be able to magically correct any mutation that has occurred in all cells of any organism at any developmental stage. Thus, the brutish process of natural selection will be unnecessary."
So evolution or devolution it does not really matter they are one in the same. The environment we are in shapes and molds us.
We manufacture that environment and we will continue to do so, all the time making sure we have the advantages we need to keep our seat at the head of that evolutionary table.
I hope you enjoyed the video.
What do think of the idea of devolution?
Do you see evidence of it?
Let me know in the comments below
at November 04, 2017