we look at the devils hour.
What is that you may ask?
Well I am sure it’s something you have experienced.
How many times have you been sleeping soundly happy in your dreams to suddenly wake up!
You look over at the clock and it reads 3.00am.
You think nothing of it and go back to sleep.
The next evening the same thing happens, okay that’s strange!
But if it happens a third time, well that is just weird.
Welcome to the Devils hour. 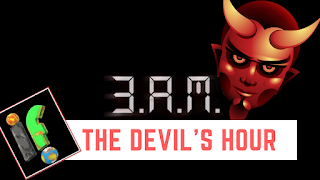 The Devil’s Hour is any time around 3 a.m. It is said that the Devil’s Hour is at the exact opposite time Christs death, this being 3 p.m.
This time in the early morning happens to be when more police and firefighter are called out to emergencies.
This time sees more deaths and accidents, this leading to belief that bad luck and evil are rampant at this time.
Is this just coincidence or maybe it’s down to a night of Partying?
Whatever it maybe the numbers support this time as being when most of the serious accidents and crimes are reported.
Maybe it’s because those that are awake should really be sleeping?
The sleep pattern we follow today of 8 hours of unbroken sleep is actually unnatural and a fairly modern creation.
Back In 2001, Roger Ekirch a historian from Virginia Tech released his paper on sleep patterns.
16 years of research revealed a large amount of historical evidence that humans sleep patterns used to occur in two distinct blocks.
He found over 500 references to a distinct segmented sleeping pattern –
Using diaries, court records, medical books and literature, ranging from Homer's Odyssey to an anthropological account of modern tribes in Nigeria.
He uncovered that First sleep began about two hours after dusk, followed by waking period of one or two hours and then a second sleep.
References to the first and second sleep began to disappear during the late 17th Century.
The urban upper classes in northern Europe started the trend of 8 hours unbroken sleep and over the course of the next 200 years filtered down to the rest of Western society.
The idea of a first and second sleep had receded entirely By the 1920s.

He says that this change occurred because of the improvements made on street lighting, domestic lighting and a surge in coffee houses which were sometimes open all night.
The night became a place of more activity.
The length of time people rested dwindled.
Starbucks you’re to blame for our messed up sleep patterns!

So maybe waking at 3am is a natural rhythm of the body and is something we should not be concerned about?
Well not so fast, others do have concerns.
Some believe that we might have access to spiritual entities when in a state of mind that occurs when in deep theta sleep between REM sleep.
It is said at this time demons become their strongest and can interact with our dimension of reality.
This is why devil worshippers and other occult group’s carry out various ceremonies at this time!
The devil himself is said to provide the metaphysical energy needed for all of the monsters and beasties to clamber out of the darkness.
The hour between 3 am and 4 am is the height of paranormal energy and is only defeated by dawn’s morning light.
Don’t panic just yet there is some good news.
You could be immune to Satan’s powers that is if you were lucky enough to be born in the devils hour.
Those born between 3 am and 4 am are said to immune to this evil energy and demons that crawl form under our beds.
If this is theory is too hocus pocus for you let’s get back to science.
It may just be that we are waking between sleep cycles and that we are rested enough by 3 a.m.
We wake to check the clock knowing that it is almost morning.
Another possibility is that of discomfort, after hours in bed we need some movement and this is what jostles us awake at the magical hour.

Also your health and wellbeing may be effecting your sleep if you are under extreme stress, there is more probability for you to wake right around that 3 a.m.
Many who wake at this time do not enjoy it, maybe it’s the fear of the devil or the fear of their boss when they turn up for work still a little sleepy.
So what do you need to do if you don’t want to wake up at this time?
Try to going to bed later than usual.
Set your alarm for 12 a.m. and then go back to sleep.
Remove sources of light and darken your room completely or wear a black-out eye mask.
Scientists say our circadian rhythms in our bodies tell us when to sleep and when to wake.
We can dictate our sleep by controlling body temperature, our emotional state, and block out the sounds from our noisy neighborhood.
But is it possible that we might have spirit visitors while we sleep?
Maybe Alien encounters?
Even Astral projection, our souls leaving our bodies and traveling the universe?
All theories for us to consider.
So tonight when you tuck yourself in just remember what’s out there in the dark!!
I hope you can get a good night’s rest
If you did let me know in the comments below, if you don’t I will assume you have been whisked away by the demons or aliens.
at October 25, 2017