Telepathy 'IF' We can read minds?


Hello welcome to if, today we talk about …………cricket sounds

Telepathy 'IF' We can read minds?

Oh you did not hear what this video is about.
Well I guess you’re not telepathic?
Or maybe my telepathic powers are not as strong as I thought.
All joking aside telepathy has long been a staple of magic tricks and comic book heroes and villains.
But is there any evidence of real telepathic abilities or any chance that we could develop them through natural or technological methods?
We are going to look at the evidence and the recent developments in telepathy and see if there will be a time when we all become telepathic.
Move aside Charles Xavier.
It’s time for us all to join the X-men.
First I guess we need to see if there is any hard proof of telepathy. There has been much research into this field and some very grandiose claims.
However one animal that may have telepathic ability is man’s best friend, the dog.
Those of you who are canine owners have probably noticed that your four legged friends are often waiting at the door when you get home or that they become excited and look out of windows shortly before a family member arrives at the house.
Is this because of the heightened senses of hearing and smell?
Scientist say “no”
Biologist Dr Rupert Sheldrake, claims animals possess powers of perception that go beyond the five known senses — namely telepathy.
Rupert said experiments for telephone telepathy were easy to set up by pointing a webcam or video camera at the telephone.
Someone close to the dog would be asked to call the house at random times, as well as person the animal didn’t know, and the reactions would be monitored.
His results showed
“Fifty per cent of the dogs knew when their owners were coming home but the number of dogs who respond to the telephone was much smaller”
Rupert holds the view that a strong connection exists between humans and animals that lies beyond current scientific understanding. 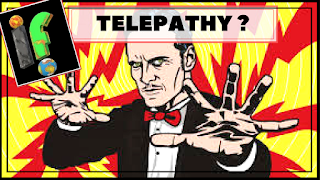 Another Recent Experiment, included monitoring the reactions of a dog while its owner was out of the house.
The owner was made to travel at least five miles away from home to be out of smell and hearing range, and then arrived home at a random time; other people in the household weren’t told when the owner would be back and the owner didn’t know when to journey home.
The owner was told at the last moment.
This Experiment also used different and unfamiliar methods of transport.
In 85 per cent of the cases the dogs went and waited at the front door.
These experiments seem to point to the existence of some kind of telepathic communication.
But what about the humans, maybe the dog owners are telepathically messaging the dogs and not the other way around?
So do we humans have the gift?
There is an 8 year old boy, a super-human, genius who has shocked scientists with his ability to READ MINDS.
Ramses Sanguino's spooky talent has leading neuroscientists declaring that "telepathy exists".
The child prodigy, already knows seven languages, and has been described by experts as "one of the smartest kids on the planet".
His mysterious telepathy has sent shockwaves around the world's scientific community.
Dr Diane Powell, who used to work at Harvard Medical School, has met the boy three times and is now "confident that telepathy exists".
The prodigy is "believed to be so far ahead" of other children his age it is said that he has the power to "change the world".
Let’s hope he chooses the side of good!!
For this child it seems that telepathy along with a super intellect are things he was born with, but what about the rest of us is there any hope we could at least become telepathic?
Maybe future technology will come to our aid.
Possibly through nanotech we could be texting in our heads, this new tech giving us an ability that’s indistinguishable from telepathy.
Our increasing ability to look inside the brain will lead to brain simulations, in turn leading to better AI, and finally, brain uploading.
This mapping of the brain will enable thoughts to be transcribed into code and sent like a regular sms.
Do you Think this sounds decades away.
MAYBE NOT!
Two men, 4,600 miles apart, have sent messages to each other using their minds.
A Blindfold covering his eyes, and earplugs cancelling out all sound, Dr Michel Berg sat in his laboratory at the University of Strasbourg France, and began to think.
Some 5,000 miles away, at another research facility in India, another man named Dr Alejandro Riera wore a tightly fitting hat, connected to a computer, and he also began to think.
For the next hour, the 51-year-old Dr Berg and his associate attempted to do something that had only previously occurred in science fiction.
The aim was to send a simple message between the continents, without using any of the five senses that human beings — and indeed animals —use to communicate.
PLOS ONE, a website used by academia, published its peer-reviewed scientific paper detailing this experiments outcome.
The report’s findings are sensational.
On that afternoon, Dr Berg and Dr Riera were indeed able to achieve ‘conscious brain-to-brain communication’.
The first scientifically documented telepathic conversation in human history.
A moment as important as Alexander Graham Bell asking “Mr. Watson--come here--I want to see you."

A Brain-to-brain interface is made possible because of the way brain cells communicate with each other. Cell-to-cell communication occurs via a process known as synaptic transmission, this is where chemical signals are passed between cells resulting in electrical spikes in activity from the receiving cell.

Synaptic transmission is the basis of all brain activity, this includes motor control, memory, perception and emotion.
Cells are connected in a network, brain activity produces a synchronised pulse of electrical activity.
This is called a “brain wave”.
These Brain waves change according to the cognitive processes that the brain is currently working through, and are characterised by the time-frequency pattern of the up and down states (oscillations).

Brainwaves are detected using a EEG.
This is where a swimming-cap like device is worn over the head and electrical activity is detected via electrodes.
The pattern of activity is then recorded and interpreted using computer software.
The electrical nature of the brain allows not only for sending of signals, but also for the receiving of electrical pulses.
These can be delivered in a non-invasive way using a technique called transcranial magnetic stimulation
So I guess we need that technology after all, but that’s okay even Professor X had Cerebro.
Wait one second there is still some hope of us having this sixth sense naturally.
A Maverick scientist thinks he has found a magnetic sixth sense in all humans
Joe Kirschvink has shown how critters across the animal kingdom navigate using magnetoreception, or a sense of Earth’s magnetic field.
He says that humans can possibly do the same and more.
This sense of magnetism interacts with the Earth’s magnetic field and like animals such as homing pigeons and others, we share this primal ability.
That means we have another sense which we could tap.
Our other five senses have all been used in communication first speech with the telephone then video with the first smart phones and computers and even touch is now an everyday part of our interaction with technology.
If this magnetic ability of the brain can be incorporated into new technologies we could have access to messages being received directly to the brain.
Do you think telepathy is part of future?
Do you think it will come from nature or technology?
Let me know in the comments below
Thanks for watching I hope you enjoyed the video.
I am sending you message …..
Subscribe, subscribe, subscribe
Hit that like button.
If your telepathic powers aren’t receiving any messages head over to the social media pages where you can use your regular five senses to see what’s going on.
See you next time
at October 21, 2017