'IF' Christ was real?

Jesus Christ 'IF' Christ was real?

This week, we talk Jesus of Nazareth!
Was he real?

The founder of the Christian religion and arguably
The most easily recognized image across the planet.

Billions of Christians have faith that he existed and follow his teachings, but today we are going to ask if there is any hard proof.
We are going to look for more than then written stories and religious texts.

We are going to see what artifacts can be found?

Are they any pieces of hard evidence?

We know that many churches are built and founded around the religious relics they hold, and that they say these are proof OF THE Divine. 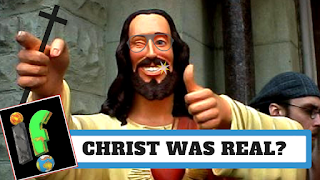 However most of these relics do not directly link to Jesus Christ, but saints and other religious figures.
There are however a small number that do, these shall be the pieces of evidence we look into today.

Probably the best known relics of, and claimed evidence for Jesus Christ’s time on earth come from his death.

The shroud of Turin is claimed to be the shroud which was laid over the body of Christ after his death.
A large piece of cloth that holds an image of a crucified man’s body, Imprinted in blood on to the material.

This material has been kept in Turin Italy since 1578 and is a source of controversy.
The first recorded exhibition of the cloth was in France in 1357, and the object was immediately venerated by the masses.

However it appeared in an age of unparalleled relic-mongering and forgery and, if real, it lacked any documentation to show its whereabouts for the previous 1,300 years.
But what about modern science can that provide proof that the shroud is genuine?
Many investigations have taken place over the years.
The advent of photography provided the first proof of the cloths validity for many.
The first pictures snapped in 1898 are said to have revealed more details that were not able to be seen by the naked eye, these include a more detailed face and deeper blood staining and detailed patterning in wounds on the body.

Today these effects can be attributed to the cameras that were used at that time, the ability of these cameras to catch an accurate image was not that good.
They often created an over or under exposed image, so these famous pictures are not so reliable.
But we do have more modern investigations.
Yves Delage, a professor of comparative anatomy scrutinized the Shroud image in 1900.
The image was found to be anatomically flawless down to the minor details: the characteristic features of rigor mortis, wounds, and blood flow provided conclusive evidence to the anatomists that the image was formed by direct contact with a corpse.
Delage, an agnostic, declared them "a bundle of imposing probabilities" and concluded that the Shroud figure was indeed Christ.
The shroud was Then again tested this time by an 11 member commission this began in 1969 and lasted until 1973.
Their job was not to validate the cloth but find the best way to preserve it.
Testing for authenticity occurred again in 1978.
The Shroud of Turin Research Project was formed with the goal to prove or disprove the shroud once and for all.

Samples of pollen were collected from the Shroud and used to identify where the shroud had been and did show that at one point in its history it had been in the Dead Sea area.
However the standard forensic tests used for haematic residues of blood, yielded negative results.
They also scanned the image with a microdensitometer to record lightness variations in the image intensity.

They found a correlation with cloth-to-body distance, assuming that the Shroud was draped loosely over the corpse, they concluded that the image contained three-dimensional information.
The tests continued and the group concluded their research in 1981
The evidence they gathered pointed very strongly toward a natural though extremely unusual process, possibly aided by substances placed with the body and linen at the time of contact.
But was that body the body of Jesus?
That could not be answered.
The next piece of evidence that is shown as proof by many are wood chips. These chips are said to be surviving pieces of the cross on which Jesus was crucified.

These relics follow a similar line to the abundant number of nails that are claimed to be from the crucifixion.
It is said that there are enough wood chips from the "True Cross" – the cross on which Jesus was crucified – scattered across Europe to fill a ship.
The 16th-century theologian John Calvin said: "There is no abbey so poor as not to have a specimen. In some places, there are large fragments, as at the Holy Chapel in Paris, at Poitiers, and at Rome, where a good-sized crucifix is said to have been made of it. In brief, if all the pieces that could be found were collected together, they would make a big shipload. Yet the Gospel testifies that a single man was able to carry it."
So this evidence is unreliable at best and would not prove directly that Jesus existed only that a wooden cross did.
But how about the nails that were mentioned maybe they are a little more reliable?
A man named Simcha Jacobovici claims two nails allegedly discovered in a 2,000-year-old tomb in Jerusalem are evidence that once a man was nailed to a cross.
And that that man was in fact Jesus of Nazareth.
Why?

Because the tomb in which the nails were found is believed by some to be that of the Jewish high priest Caiaphas, who presided over the trial of Jesus in the New Testament.
In their coverage of the film which featured Simcha, Reuters reported that most experts and scholars contacted dismissed the filmmaker's case as far-fetched and called it a publicity stunt.
Though only three or four nails (the exact number is up for debate) were supposed to have pinned Christ to the cross
In 1911, 30 holy nails were being venerated in treasuries across Europe.
So once again we have a surplus of evidence and still no definitive proof.
Maybe this one will do it?

Again a little circumstantial, which seem to be becoming the norm, Christ’s crown of thorns.
Many Christians believe the thorny crown and instrument of torture still exists today.
Pieces are scattered across Europe.
One near-complete crown is housed in Notre Dame Cathedral in Paris.
The documented history of Notre Dame's Crown of Thorns goes back at least 16 centuries — an impressive provenance — but it doesn't quite trace back to A.D. 30.
Another problem is that Notre Dame's crown is a circlet of brush, and is completely devoid of thorns.
I think that we must discount this as evidence due to the fact it does not match with the popular description of The Crown of Thorns mentioned in Christian literature.
There must be something more concrete, we don’t have enough evidence to present a solid case, if this were court of law we would have no case!
Let’s get back to science, archeology must have found evidence. What can they provide to help us answer this question?

Archeologist have discovered an ossuary.
This new artifact, a medium-sized box in which human bones were placed for permanent burial after the flesh had decayed away.
This a practice that was employed for only a brief period of time from about B.C. 20 to A.D. 70.
The box is made of a soft, chalky, limestone, common to the area.
However its contents have long since vanished.

An inscription etched into the side reads, "James, son of Joseph, brother of Jesus" in the Aramaic script of the time.
Studies, including scrutiny under a scanning electron microscope show the inscription is genuine.
The patina, or oxidized surface equally covers both box and the interior of the etched letters.
The recognized expert on such matters, Dr. Andre Lemaire, concluded: "I am pleased to report that in my judgment it is genuinely ancient and not a fake."

Yet again some doubt can be cast all three names used were common in that era, but seldom was the deceased's brother mentioned, unless that brother was noteworthy.
To have all three listed, in correct Biblical relationship certainly supports the possibility of this being the ossuary of the Biblical James.
But again no Jesus!!
Jesus Christ of Nazareth has left virtually no physical evidence behind.
The few items associated with Jesus, such as the Holy Grail and cross of Christ, have been variously collected, divided and forged.
Their perceived spiritual value makes authentication of these items difficult.
The shroud of Turin remains an inexplicable image and writings from the many historical figures are retelling of stories passed down through the ages.
In summary there is no hard evidence and maybe to those that believe it is not needed, following the teachings of a figure who may or may not have been real requires faith.
Faith is something you have or do not have, it is a personal choice that should be respected.
The validity of the existence of the religions figure head is not important as long as those that follow the teaching respect others and do not try to force their faith upon people who have a different belief.
Who knows maybe in the future an artifact maybe found, until that time believers and non-believers should show understanding toward one another.
All religions have artifacts they deem proof of their deity and validate their religion.
A little respect towards these beliefs may make the world a better place.