A Hellish……hello and Halloween greetings from IF
Today let’s take a look at the spooky holiday and ask ‘IF’ we should be celebrating or hiding when October 31st rolls around.
The holiday originally began in the 8th century it was the day on which people feasted before the important religious festival of all saints day.
It was first named All hallows eve but as the years have passed the name has changed to the familiar Halloween we use today.
The day was a time to eat drink and be merry in celebration of the Christian saints this day was celebrated on May 13th but in the year 1000 Pope Gregory III chose to move the holiday to November 1st. 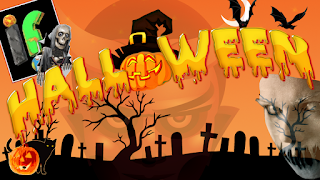 Christianity was on the rise through the Celtic tribes of the UK at that time and the Pope thought that the Church should create a sanctioned holiday near the Celtic day of the dead.
A festival known as Samhain
Samhain (SOW- in) is a 2,000 year old celebration of the Celtic New Year.
It was the beginning of a new season and a time for them to start their harvest.
This led it to be associated with the cycle death and new beginnings.
The celebration of the holiday began the night before, they believed the ghosts returned to the earth at this time.
Bonfires and dressing up as well as making sacrifices to their gods were part of the holiday fun for the Celts.
Samhain came in contact with another holiday when the Roman Empire clashed with Celts after the Roman invasion of Briton.
Rome conquered the Celtic lands, the holiday then became mixed with the traditional Roman festival of Feralia.
Feralia also celebrated the dead, and Pomona the day when Romans chose to honor the goddess of fruit and trees.
Folklorist John Santino said
“There was a belief that it was a day when spirits of the dead would cross over into the other world,”

Professor Nicholas Rogers has a different opinion he says, “There is no hard evidence” to prove that the Celtic holiday really was a celebration of the dead.”
“According to the ancient sagas, Samhain was the time when tribal peoples paid tribute to their conquerors and when the sidh [ancient mounds] might reveal the magnificent palaces of the gods of the underworld.”
However this festival is seen today through the lens of our modern beliefs and is the night the spirits
Once again get to walk the earth.
Paganism is on the rise a United States Census Bureau Abstract on Self-Identified Religious Populations, reports the number of Pagans and Wiccans (witches) combined results to 0.3% of the population.
Which means that 3 out of every 1,000 people you meet will be Pagan or Wiccan.
These religions survive after thousands of year of persecution from the Roman Empire and the Holy Roman church.
Pagans were executed by crucifixion put in the first death camps and tortured to death later burnt and drowned as witches.
These horrific acts seared into the consciousness of the people of that time and still with us today.
Traditional Halloween decorations depict ghost and ghouls and skeletons reflecting the celebration of the dead and of course the famous images of witches and their black cats all to remind us of the evils of these non-Christian religions.
This history may be why the holiday is so popular in The US today!
Irish and Scottish immigrants brought their traditions to the U.S. during the mid-to-late 19th century and that is when Halloween began spreading throughout the country.
Up until that point It was not considered a major holiday, celebrations of the holiday were mostly held in Maryland and in Southeast Colonial America.

Today the holiday is huge, so where do other traditions come from like Pumpkin carving and trick or treating?
Carved out of Pumpkins are actually a modern interpretation, the first Jack-o-Lanterns were made from turnips.
They weren’t meant to be works of art, but rather a means to keep away any unwanted guest.
There is an Irish folktale about Jack O’Lantern the story says that he was a man forced to roam the planet for all eternity, he had fooled the devil and was not allowed into Hell.
Jack, or “Stingy Jack,” wasn’t allowed into Heaven either.
He lights his way at night by carrying a turnip with burning coal inside.
The Jack-o’-Lanterns were carved out of turnips until these Irish and Scottish immigrants got their hands on pumpkins in the U.S. and decided that they worked just as well.
So that leaves just trick or treating and this probably the most interesting of all.
Let’s turn the lights down and crank the volume up this is where the true meaning of Halloween comes into play.
The story of trick treating goes back to the ancient Celts. This is when they would …………

I am So sorry.

Have a happy safe Halloween.
If you are not of the spirit world please spookily press that like button.
If you fearsome fan of the channel please hit that horrific Red Sub button
Watch out for them Ghouls and monster and if you survive the Halloween horrors I will see you next time.