Evolution 'IF' These animals evolve?

Evolution 'IF' These animals evolve?

This week we ask the question which species will inherit the earth?
We are going to imagine a world in which humanity has long since disappeared, what animals would most likely rise up to take our mantle?
Which animal group has the brains or the ability to evolve into a civilized culture?
Let’s take a journey into the future and speculate on our planets new masters.
The first animal we will look at has just made the news with the discovery of an underwater city.
This is where these animals cohabit and build simple structure, communicate and have a simple aquatic community.
What creature is this this you ask?
Mermaids
Crabs
Nemo
Nope, it’s the humble octopus.
Scientists recently found that the spectacularly named “gloomy octopus”, or to use its correct name octopus tetricus, are not the loners there were once considered to be.

The Australian discovery found that the species has been seen to congregate, they communicate and have been living in a little aquatic city known as Octlantis.
They have even been observed evicting one another from the site when they are a disturbance to their eight legged neighbors!
Jervis Bay, south of Sydney Is the location of this marine marvel.
Professor David Scheel, led the research, he draws direct comparisons with our own communities.
His new report states: “These behaviours are the product of natural selection, and may be remarkably similar to vertebrate complex social behaviour.”
Other Minds a book by Peter Godfrey-Smith calls – the octopus as intelligent alien.
The scuba-diving philosopher of science looks into the wonders of cephalopods and says they are smart and playful creatures who live outside the brain-body divide.
These animals are said to possess the intelligence of a three-year-old human.

This recent find confirms scientists’ suspicions about cephalopods and culture.
And this Octocity is not the only one.
Another site in Jervis Bay, found just 50ft below the surface was discovered in 2009 and was given the name Octopolis.
This “artificial reef”, an underwater island of safety in a dangerous area, a defense against predators such as sharks, seals and dolphins.

The octopi had constructed walls from their discarded clam and scallop shells.
The report’s co-author, Stephanie Chancellor, noted that these piles “were sculpted to create dens, making these octopuses’ true environmental engineers”.
Godfrey-Smith concluded that these are multi-generational places that may concentrate the evolution of octopus brains.
Let’s take this already intelligent animal and give it a few thousand more generations of evolution.
Dr. Russell Burke, a Hofstra University biology professor specializes in ecology and evolution.
He has a few predictions that’ll make your brain spin.
He said
“[Cephalopods] have a lot of the characteristics that we think of as being important in humans.
First, they have relatively large brains. In relation to their body size;”

“They have big eyes, connected to the big brain, which means they work in the same kind of world that we do,”
He adds. “They’re large eyes, are very complex eyes, and they work much like ours.”
Cephalopods have the perfect eyes for world domination.
“You make a big fuss about opposable thumbs, imagine if we had eight of them!
Tool building would be a very easy task.
. “Cephalopods clearly manipulate objects, they use tools. They don’t build things, aside from shelters, but it’s certainly imaginable that given the time, given some other factors, those kinds of things could happen.”
So at the time of writing this he was unaware of the discovery of Octlantis could they be evolving quicker than we think?

“If a cephalopod learns something, tries some trick and it works and another cephalopod sees it? I mean, they definitely learn by watching each other, so if those pattern behaviors developed, it could pass among groups very quickly,”
OK, so these octopi seem like a good option. They are what we imagine when we think about aliens, they have the tentacles, the big eyes, the brains; are they next in line for world domination? 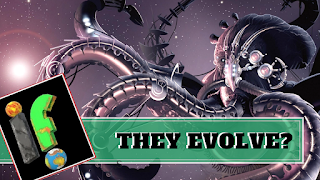 Not so fast there are a couple of other contenders.
Sticking with the oceans how about dolphins?
Dolphins are already thought to be the second most intelligent species on the planet.
a 2004 study lead by a Dr. Lori Marino, neuroscientist and marine mammal expert found that dolphins have encephalization levels.
Encephalization being a rough estimate of intelligence that compares brain mass to an organism’s total body mass.
Below only modern humans, and above all other mammals.

Dolphins have brains that are about four times the size you would expect for their body size.
They’re pretty close to us, in comparison a human has an encephalization of approximately 7.5.
What if dolphins are the species of super genius, just biding their time, waiting for us to step aside and hand them the planet.
Well maybe not and here is why.
Marino says.
“I don’t think they will take our place. The reason is: Dolphins have been successful as a very smart species, or rather, an order of mammals, for tens of millions of years. If we disappear, the only thing that really would happen is that they would be free to continue their lives. I don’t think there would be any reason for them to become anything like us. It would honestly be a step down,”
In this study, it was found that dolphins developed their intelligence between 60 million and 20 million years ago.
In other words, dolphins have had, at the very least, 20 million years to take over the planet, and either have had no reason to do it, or have chosen not to!
Okay so the Oceans only give us one real contender but what about on dry land?
Well first I think we need to remove primates from our list. They did after all evolve into us so let’s call that a win and move on.
RACCOONS AND BEARS maybe a good group to take a look at. 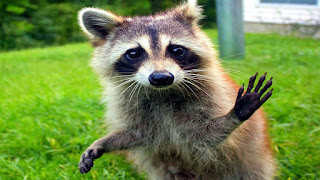 Marino says
“Sometimes you think raccoons are just going to take over the world.
Those kinds of animals that have to deal with the same pressures as humans, especially in the urban environment. I think they’re facing a lot of pressure to improve selection.”
The Scientific American blog writer
Jason G. Goldman. Agrees with Marino’s sentiment.
“It’s certainly possible that something like a rat or raccoon could eventually evolve human-level intelligence.” He said.
Although Goldman also thinks another animal would do it before raccoons.
“What species could achieve human-like language, human-like teaching, and human-like tool use after a few million years of evolution?”
“The candidate species might be chimpanzees or bonobos, or dolphins and whales, or elephants, or ants. Each of these species is already part of the way there for each of these elements. Notice that each of the candidate species is social—I think this is key.”
Ashley Bennison, an evolutionary and behavioral ecology post grad student from the University of Exeter in Cornwall, England Thinks a little differently she said
“Take humans out of the equation and we are left with a world that is changing at a much slower rate,” “In a much slower world I would expect the rise of the herbivores at first, only to be capitalized by carnivores later on. Bears, cats, and dogs—already incredibly clever animals—could potentially become fantastically efficient predators capitalizing on the much higher numbers of available prey.” What I’m hearing is that, with more prey in a world without humans, large carnivores could have the chance to sit back, relax, and focus less on eating and more on developing societies.
“This could, in effect, lead to many clever animals starting to converge on our niche, if you will,”
Bennison says. “So my vote? Probably the bears. Those guys are awesome.”
That’s it, they are our contenders.
Which group do think is most likely to end up at the top of the food chain.
Will Earth end up looking like an Alien world filled by octroplis. Eight legged citizens slithering back and forth going about their day?
Or will it be a planet of the dolphins a society lacking in construction a civilization based on communication?
Or the final world something that resembles the Thunder cats or planet filled with Rocket raccoons?
Let me know which you think is most likely in the comments below.
at October 14, 2017