This week it’s apocalypse
Nope not that big blue guy who ruins the x MENS DAY
But the end of it all!!!
The destruction of the Earth and all life upon it.
Wednesday the 23 rd. September 2017 was yet another date given for the end of times.
According to David Meade author of Planet X: the 2017 arrival we should all be dead.
If we can see the future a topic covered in another of our videos
Meade said, ‘It is very strange indeed that both the Great Sign of Revelation 12 and the Great Pyramid of Giza both point us to one precise moment in time
September 20 to 23, 2017.
‘Is this the end of the Church Age and the transition to the Day of the Lord? There couldn’t be two greater witnesses. 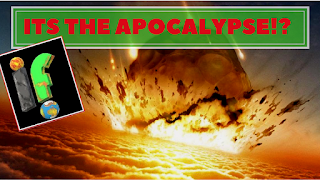 Meade’s prediction based on the Bible passage Isaiah, Chapter 13 9-10 which says,
‘See, the Day of the Lord is coming – a cruel day, with wrath and fierce anger – to make the land desolate and destroy the sinners within it.
‘The Stars of Heaven and their constellations will not show their light. The rising Sun will be darkened and the Moon will not give its light.’
So the bible is to blame!!
Well although the bible gave us the very word apocalypse, it is not the first or does not have a monopoly on the creation of “end of times”
According to Isaac Asimov's Book of Facts there is as Assyrian clay tablet which dates to approximately 2800 BC it is inscribed with the words "Our earth is degenerate in these latter days. There are signs that the world is speedily coming to an end. Bribery and corruption are common."
http://metro.co.uk
This is one of the earliest examples of the perception of moral decay in society being interpreted as a sign of the imminent end.
Doomsday mind sets have gripped many ancient cultures for example the Romans.
Early in Rome's history, many Romans feared that the city would be destroyed in the 120th year of its founding.
There was a myth that 12 eagles had revealed to Romulus a mystical number representing the lifetime of Rome, and some early Romans hypothesized that each eagle represented 10 years. The Roman calendar was counted from the founding of Rome, 1 AUC being 753 BC. So 120 AUC is 634 BC.

Some Romans figured that the mystical number revealed to Romulus represented the number of days in a year (the Great Year concept), so they expected Rome to be destroyed around 365 AUC (389 BC).
http://www.abhota.info/end1.htm
It never happened.
Like many after them they sat back and waited for the next apocalyptic date to be revealed.
This lust for the end of all things is common to all cultures all belief systems.
We still obsess over it today.
2000 the millennium was a date when the modern digital would come crashing down, computer systems bringing the world to its knees as they could not work past the new date. It seems ridiculous know looking back.
How about 2012 the insanity that washed over the planet from a prediction from a 5000 year old calendar.
This phenomenon was a range beliefs, that a cataclysmic or otherwise transformative events would occur on or around 21 December 2012.
This date was regarded as the end-date of a 5,126-year-long cycle in the Mayan Long Count calendar. Festivities to commemorate the date took place on 21 December 2012 in the countries that were part of the Maya civilization (Mexico, Guatemala, Honduras, and El Salvador), with main events at Chichén Itzá in Mexico, and Tikal in Guatemala.
Astronomical alignments and numerological ideas were also thrown around for this date.
Those in the know claiming A New Age was marked by the date and a new period of change would begin during which Earth and its inhabitants would undergo a positive physical or spiritual transformation, and that 21 December 2012 would mark the beginning of a new era
Others suggested that the date marked the end of the world or a similar catastrophe. Scenarios suggested for the end of the world included the arrival of the next solar maximum, an interaction between Earth and the black hole at the center of the galaxy and Earth’s collision with our old friend planet Nibiru.
We saw a crop of movies capitalize on the craze and many people became so obsessed it even lead to suicides.
But once again THE date came and went relatively peacefully.
So why are humans so obsessed with the end of times?
Why do we love disasters so much?
And how can we be so foolish that every time an apocalypse is predicted so many believe?

We seem to Enjoy the Self-Fulfilling Prophecy.
And experts agree.
Shmuel Lissek  of the University of Minnesota studies the human fear system
He believes that at its heart, the concept of doomsday evokes an innate and ancient bias in most mammals.
Lissek says "The initial response to any hint of alarm is fear.
This is the architecture with which we’re built,”
Over evolutionary history, organisms with a better-safe-than-sorry approach have survived.
This mechanism has had consequences for both the body and brain, where the fast-acting amygdala can activate a stress response before "higher" cortical areas have a chance to assess the situation and respond rationally.
So why do we enjoy this fearful response?
Lissek thinks that apocalyptic believers find validation in the idea that the end is nigh.
People with a history of traumatic experiences, for example, may well be fatalistic.
For them, finding a group of like-minded people offers comfort and reassurance.
The removal of individual responsibility is also very attractive, it offers solace in the fact that we are part of a cosmic plan we can’t control.

There is also an even broader allure to knowing the precise end date.
Lissek says
"Apocalyptic beliefs make existential threats—the fear of our mortality—predictable,”
Lissek, working with Christian Grillon and colleagues, found that when an unpleasant or painful experience, such as an electric shock, is predictable, we relax.
The anxiety produced by uncertainty is gone.
Knowing when the end will come doesn't appeal equally to everyone, of course
But for so many it is paradoxically a reason to stop worrying.
This offers people a focus they can begin preparing.
Doomsday preppers who assemble their bunkers and stock canned food, are engaged in goal-oriented behaviors, which are a proven therapy in times of trouble. stated Lissek.

These predictions also offer believers the Power of Knowledge.

Karen Douglas a Social psychologist at the University of Kent studies conspiracy theorists and believes that her study subjects, share attributes with those who believe in an impending apocalypse.
She has highlighted that although these are essentially two different phenomena, certain apocalyptic beliefs are also at the heart of conspiracy theories
As an example, the belief that government agencies know about an impending disaster and are intentionally hiding this fact to prevent panic.
Douglas says.
"One trait I see linking the two is the feeling of powerlessness, often connected to a mistrust in authority," Among conspiracy theorists, these convictions of mistrust and impotence make their conspiracies more precious—and real. "People feel like they have knowledge that others do not."

Knowing the end date offers us a Lesson from Dystopia
Steven Schlozman, an experienced child psychiatrist believes it's the post-apocalyptic landscape that fascinates people most.
Schlozman said.
"I talk to kids in my practice and they see it as a good thing. They say, 'life would be so simple—I'd shoot some zombies and wouldn't have to go to school,'"
In both literature and in speaking with patients, Schlozman has noticed that people frequently romanticize the end times. They imagine surviving, thriving and going back to nature.
"All of this uncertainty and all of this fear comes together and people think maybe life would be better" after a disaster”
Schlozman says. Of course, in truth, most of their post-apocalyptic dreams are just fantasies that ignore the real hardships of pioneer life and crumbling infrastructure.
With these explanations things make a little sense it’s more about the knowing and the attention that brings, rather than the event but it does remind me of the story “Boy who cried wolf”
We have heard so many predictions through our history.
That if someone is right they will probably be ignored for the longest time, maybe up until the point we get smashed by an asteroid or the world’s volcanoes all decide to blow in one unholy explosion or the earth shakes until nothing stands!!!
We know one day the apocalypse will happen we have our sun to thank for that but that is not due for another 5 billion years.
I think we will have populated many other planets by this time and humanity will continue some where is the distance cosmos.
Thanks so much for watching
If you liked the video please give it a thumbs up if not a thumbs down is fine.
Do you believe in an apocalyptic prediction?
Which past predictions did you believe to be true?
For me I got swept in the 2012 phenomenon
Leave a comment lets us know what you thoughts.
As always follow us social media
Hit me up on twitter
If @ If4US
Sub friend and all that good stuff
at September 24, 2017