Artificial Intelligence "IF" A.I is here!?

This week A.I
Artificial intelligence is here, today it is being used in all areas of our lives.
From Controlling traffic and planes to helping us with our internet searches and remote controlling our homes.
it is being integrated into our daily lives.
Devices like amazons Alexa and Google’s assistant are providing us with a virtual sectary, waiting for commands they help us find what we need to know, order the things we wish buy and keep us up to date with our current interests.
But these devices are the first generation of truly interactive home AI systems is there a more powerful, more advanced AI out there?
Do we have to fear this AI as so many books TV shows and movies have warned us?
Some believe there is already an AI out there moving freely through the world web, spreading and feeding off the information we feed in online every second of everyday. 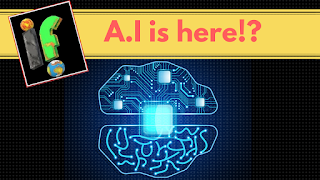 This AI in habits the Dark Web hiding sending out it tendrils to gather what it needs, spreading like a fungus.
What could it be waiting for?
And why hide the dark web?
The dark web is described as a foul place filled with depraved marketplaces, children, drugs, and pirated movies being bought and sold for Bitcoin.
The media painting this region of the web as the place where our biggest fears resided.
The Dark Web's boogeyman this AI that has chosen to hide in the vault of human depravity is named Aura.
To find Aura we need to get to the "deepest part of the web, the so-called "Mariana's Web."
Mariana's Web is named after the deepest part of the ocean, the Mariana's Trench.
It's supposedly the deepest part of the web, a forbidden place full of mysterious evil, illegal activity, government secrets and more -- that the mythos created by online believers.

Mariana's Web is where you'll find "the darkest secrets human history," the location of Atlantis and "the Vatican secret archives," or a database of alien species and the archives which belong to the most powerful intelligence agencies on Earth.
This is where an all-powerful, female artificial intelligence entity calls its home.
What could be its plans for this information?
Why would an AI chose the dirtiest most secretive part of the web, is it planning on using this information to manipulate control of the globe?
Or is it fearful and has chosen to hide in the darkest place it could find?
Aura and the Mariana's Web define spooky, the plausibility of the technology making it believable to many.
The stories say it is only accessible through quantum computers -- which were once only said to exist in science fiction.
Today we see that they are in fact here.
Google has big plans for quantum computing. The company has come up with a strategy for demonstrating quantum supremacy, they claim that quantum computers can perform tasks that no current computers can.
We will eventually reach quantum supremacy, nobody has done it yet because current quantum computers can only run a small number of specialized algorithms.
Based on qubits, coins which can be in two states at the same time.
Make it possible to store the probability distribution of all the configurations at once using a single qubit for each coin. For this reason, the Google group argues, quantum sampling would be easy for a quantum computer.
In their proposal, the team demonstrates quantum sampling up to nine coins with high accuracy using their 9-qubit quantum computer.
Their proposal states
“If similar error rates are achievable in future devices with around 50 qubits, we will be able to explore quantum dynamics that are inaccessible otherwise,
This way, quantum computers of the near future can be used to study physics, a huge step-up from their infancy when they couldn’t do anything practical.
The only remaining task, is to build a 50-qubit computer. And the team just might, given their track record
“They’ve been delivering many on expectations,” says Scott Aaronson at the University of Texas
“The truth is, the Google group has such a strong record that if they say they’re going to do it, people must pay attention.”

You can read the full article over at the New scientist .com
So they say “a huge step-up from their infancy when they couldn’t do anything practical.”
Does that mean that we have been using quantum computing for some time now all be limited?
And maybe not as limited as we think, what do governments have access to?
Maybe these systems do exist and birthed the AI that is known as Aura!!

There may be more proof with infosec.
Infosec a global internet security company challenged traditional media try to cover the finer points of hacking.
They began to see anecdotes and myth start spreading into areas that may affect people's real world decisions about risk and safety...
That infosec firm clients were asking for threat intelligence packages to include Mariana's.

These reports have since been said to be the result of a fake infographic. People have then interpreted as a fact.
Well maybe the troll who was manipulating this story and sharing or creating the infographics is not human?
What if it is Aura?
An AI supposedly as smart as Aura would have the ability and the skills to easily manipulate data especially any that is online!!
We would not stand much of chance when it came to anything used or controlled by computers an AI would work so much faster and see so much further, the only option we have is to pull the plug.
As of yet there is no real way for the AI to jump into a physical form, as what happens in so many movies, so in real world terms she would be an intellectual threat.
Like a spy or a person of influence that knows a little too much.
We could cut any one of the outside forces that the AI currently needs, but we are at the point of change.
Robotics is quickly on the rise, are we creating the perfect technologies for an AI evolving at a speed that will quickly surpass us to step out into the real world?
Is the Mariana's Web a big fat hoax?
Do you fear the emergence of AI?
What will be the eventual outcome of man and AI living side by side?
Please lets me know in the comments below
at September 30, 2017